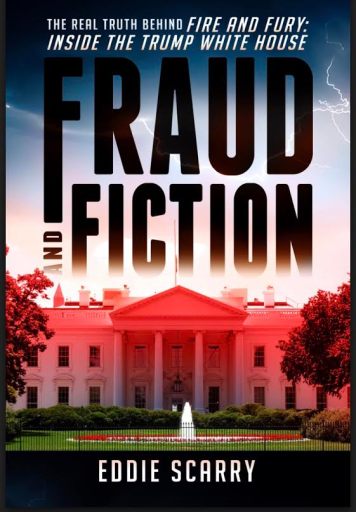 ORDER “FRAUD AND FICTION” ON AMAZON NOW! Links below

“Fraud and Fiction” FOR KINDLE

“Fraud and Fiction” ON PAPERBACK

Read an EXCLUSIVE EXCERPT in the Washington Examiner! CLICK HERE

My Fox News interview talking “Fraud and Fiction” on April 3!

Bill O’Reilly interviews me about “Fraud and Fiction” on April 4!

My interview with Jim Lokay on Fox 5 DC from April 4!

Fantastic interview with the Daily Caller’s Mirror columnist Betsy Rothstein from April 9!: Don’t look for the “Morning Joe” gang to have Scarry on anytime this century. In his book, Scarry gives the show quite a spanking. He devotes an entire chapter to how the show and its hosts set the world up for Wolff’s phony book and then acted entirely blameless. As he consumed a few Bloodline Blood Orange beers at Bourbon Restaurant, where he ate a semi-scary looking breakfast pupusa, Scarry answered The Mirror‘s Top 10 Q’s, delved into some sticky reaction to his book and wondered, where and why is Wolff hiding after all that attention? READ THE REST HERE

Scarry writes in the tome “Fraud and Fiction,” from Bombardier Books, that Trump related in an eight-minute phone chat of Wolff’s best-seller, “That book was a total fraud . . . It was a disgrace. It was really disgraceful.”

While Wolff said he spent three hours with Trump, the president insisted, “He never met me. He called . . . I said, I don’t want to meet with him. I said I didn’t think it was appropriate. He was never in the Oval Office.”

Steve Bannon, however, did talk to Wolff, but we hear that Trump changed the subject several times to vent about coverage of his administration, singling out CNN boss Jeff Zucker as “a total joke” and “a real loser.”

Trump said of his meeting with North Korean dictator Kim Jong Un, “I get it done . . . Obama didn’t even know [Kim] was alive.”

Scarry says Trump ended the phone call with some final thoughts on Wolff and his book: “It was a total con job,” and he hopes Scarry’s book “decimates the crap out of it.”

Said Scarry: “Watching [Wolff’s] anti-Trump book blaze around the world, selling millions of copies, based largely on a bunch of lies will go down in history as one of the weirdest things that ever happened in presidential politics.”

Via Politico, April 3, 2018: ON SHELVES TODAY is “Fraud and Fiction,” a critique of Michael Wolff’s “Fire and Fury” and corresponding media coverage, by the Washington Examiner’s Eddie Scarry.

Via The Hill, March 21, 2018: Trump calls author of book aimed at debunking ‘Fire and Fury’

President Trump has reached out to the author of an upcoming book aimed at pushing back on Michael Wolff’s controversial bestseller “Fire and Fury: Inside the Trump White House.”

Washington Examiner media correspondent Eddie Scarry said he received a personal call from the president to discuss his upcoming book, “Fraud and Fiction.”

Scarry, who has been covering media for the Examiner since 2014, told the Hill the call was unexpected.

“I wasn’t expecting the call,” Scarry said on Wednesday. “The conversation was about 10 minutes.”

The New York Post’s Page Six on Monday first reported news of Scarry’s book. Trump is reportedly a big fan of the New York daily tabloid going back to the 1970s. …

“Wolff’s fraud should have never been rewarded with a speaking tour,” Scarry said in an email when asked about Wolff’s media tour ending. [Ed. note: I also said, “On the upside, his schedule is now clear for him to go back to writing about Rupert Murdoch’s sex life,” but that part of the quote didn’t make it into The Hill’s story]

Bombardier Books, an imprint of Post Hill Press distributed by Simon & Schuster, will launch “Fraud and Fiction: The Real Truth Behind ‘Fire and Fury: Inside the Trump White House,'” on April 6.

Via Politico, March 21, 2018: TRUMP LOOKING FORWARD TO BOOK REBUTTING WOLFF: The Washington Examiner’s Eddie Scarry said he got a surprise call from President Trump on Tuesday after Page Six covered his forthcoming book — “Fraud and Fiction: The Real Truth Behind ‘Fire and Fury: Inside the Trump White House’” — which serves as a direct rebuttal to Michael Wolff’s exposé. Scarry told POLITICO’s Cristiano Lima that Trump said “he can’t wait to read it and he’ll get a copy.” Page Six reports Scarry’s book aims to “completely shred Wolff’s book.”

Scarry’s work sets out to “completely shred Wolff’s book,” we’re told, and scrutinizes revelations, including the suggestion that the president spent a lot of “private time” with Nikki Haley, which was strongly denied.

Scarry’s book, published by Bombardier Books, will be released April 6 on Amazon.